Trinity Church was founded at the Disruption in 1843 and is now the result of several unions going back to 1929. The building was opened for worship on 13th July 1845 for the congregation known then as Rothesay Free Parish Church. The cost was over £3000. The first sermon was given by a well known preacher of the time, Dr Thomas Guthrie of Edinburgh. The offering for the day amounted to £706. 3s.8d! 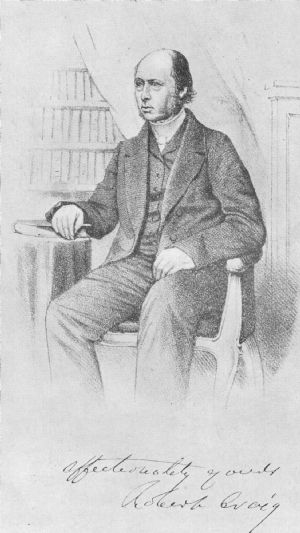 In 1938 the congregation was united with St James' Church (the building being on the High Street opposite the present Police Station). St James Church roots went back to the Free Gaelic Church, later to become Chapelhill Church.

In 1942 the congregation united with Craigmore High Church.

In 1979 the congregation united with the West ChurchChurch Building

The building is of Gothic architecture. The narrow, acutely pointed windows of the façade, though, are Early English in style. The ogee, double curvature opening in the spire, the ogee moulding round the tower, and the leafy concrescences that crown the corner pinnacles of the tower parapet indicate the influence of The Decorated style. The structure, which is 96 feet long by 48 feet wide and has five spacious windows each side of it, suggests the beginning of a transition period in architecture, belonging to a church type much in favour at the time of its erection 163 years ago. In August 1907 the roof of the church collapsed without warning. Fortunately no one was in the Church at the time. Within a year the building was re-roofed and with improved facilities, wider pews with no doors as before, and the present pulpit replacing an older fashioned one. In 2004 some pews were removed to create a dais for the choir and corresponding area for the church office bearers. Some were also removed to allow wheelchair access. A recording system was also installed allowing all services to be recorded and distributed to the elderly and housebound.

The Great central window is the first World War memorial, designed by Mr Oscar Paterson, of Glasgow with the words of dedication: "To the Glory of God and to honour our members who suffered and served in the great War 1914-1919."

The middle portion, top part, portrays the Glorified Christ and shows behind Him the symbol of His triumph on the Cross. Two angels kneel adoring at His feet, and Seraphims look upon His face. Above, and typified as a dove, the Spirit of God broods tranquilly. The lower part of the same middle area sets out the mystic scene described in the Revelation of John, chapter 19 verses 11-16, showing the Word of God, Faithful and True, mounted on a white horse and wearing a blood red robe, on which is emblazoned "King of kings and Lord of lords", with a crown of thorns adorning the conqueror's brow.

Of the two side paintings of the central window, one portrays a wounded soldier amid the ruins of war with his eyes uplifted and his arms upraised to an angel as she comes to him with a golden crown in her hands. The accompanying message is: "Be thou faithful unto death, and I will give thee a crown of life." The other side painting has for its theme the victorious warrior safe at home at last. In pleasant and peaceful surroundings, 'mid pastures green and beside still waters and with his dwelling place nearby, the garland of his victory is being bestowed upon him. The writing beneath is simply: "I have fought a good fight."

The topmost parts of the two side central windows have representative saints of old depicted, with St Andrew at the forefront on one and St George on the other. The saints are seven in number, seven being considered a sign of felicity. Running through the heart of the whole window is the Rainbow of Promise.

The memorial for the Second World War is found on the east side of the Church with a plaque with the names of those connected with the congregation who were killed in action. Beside this is a stained glass window by Gordon Webster, Glasgow, depicting on the left side Cain's brutal attack on his brother Abel with the altar for the offerings which brought Cain's jealousy to erupt in bloodshed, and on the right side a group joined by a soldier in uniform at the foot of Calvary Hill looking up to the three crosses and to "Jesus as the Mediator of the New Covenant and to the blood of sprinkling that speaketh better things than that of Abel" (Hebrews 12 v 24). The pelican on one side depicts sacrifice in dark days and the phoenix resurrection from the ashes. Pictures of a submarine, depot ship and landing craft symbolise the part Rothesay and Bute played in the Second World War with members of the Royal Navy and Commandos trained here. At the top of the window there is a Communion cup giving a reminder of Christ's sacrifice of His body and blood for the peace and salvation of the world.

On the west side of the Church is the Munn window, with the inscription: "To the Memory of Provost Munn and his family, who loved to worship in this House." The Munn family had a long and close connection with the congregation, although eventually all emigrated to Harbour Grace, Newfoundland, where they were pioneers in the fishing industry. The upper part of the window shows Jesus, serene, erect, in the storm-tossed little boat, in which, for the fear of perishing, His disciples had wakened Him from sleep. It bears the words from the Scripture narrative: "He rose and rebuked the wind and said unto the sea Peace: be still". The lower portion of the window portrays the story enshrined in the Second Letter of John, with the lady elect and her children distributing food to the poor.

The pulpit fall and the colour of the fabric in the pulpit area reflects the movements and moods of the Christian Year: purple for preparation and penance; white or gold for celebration and rejoicing; green for re-commitment and growth in Christ; red for the fire and power of the Holy Spirit.

One of the pulpit falls was presented by the Rev Colin Renwick, when he was assistant minister, at the celebration on 21st May 1989 of the centenary of the 1st Rothesay Co. of the Boys' Brigade. The Boys Brigade motif was embroidered by Mr Renwick's parents of Aberfeldy, to a design by Mr Lyn Bulloch, who happened also to be the Church Organist at the time. The old BB Company Colours lie to the West side of the church.

The clock came from the former reformed Presbyterian (Cameronian) Church in Rothesay, going back to 1820, whose members acceded in 1875 to Trinity, who used it as a Mission Hall until 1912.

Facing the front door of the Church is a memorial tablet to the Rev Robert Craig, first minister of the congregation. On the wall of the rear of the Church is a Roll of Honour in burnished metal containing the names of all who served as well as died in the Great War 1914 - 18, incorporating sections for the United Free Parish Church, St Chapelhill United Free and Craigmore United Free, now united in Trinity. At the West side of the rear wall there is the War Memorial plaques of the former West Church. The two oak cabinets containing Communion vessels were given by the late Major Hicks MC TD and the late Mrs John Morrison.

In 2000 after many years of neglect a group of volunteers started to tackle the garden. This job was affectionately called 'Rumble in the Jungle' as this was what it was like. Two to three years was spent just clearing rubbish and cutting down the weeds and over grown plants. Monday night is still gardening night and the garden has come a long way at very little cost to the congregation as work is unpaid and plants and equipment have all been donated. The garden can now be used once more by the children of the church and perhaps one day wedding photographs will be taken there again!